Conditions and Inference of Linear Regression

The conditions for linearity, is whether you have linear relationship between explanatory and response variables. This is to be expected. Non-linearity algorithm is exist, but beyond the scope of this blog. You might want to check my other blog posts.

We can check the relationship based on scatter plot or residual plots. Take a look at the graph below. 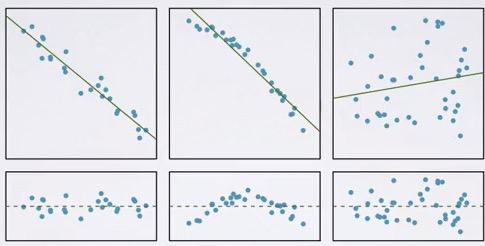 The first plot you have good linearity, second plot will give you a more curvy plot, and the third one has highest residual. Not obvious linearity in the third plot.We see residual plots below for the the respective plot. So, how do we make it? 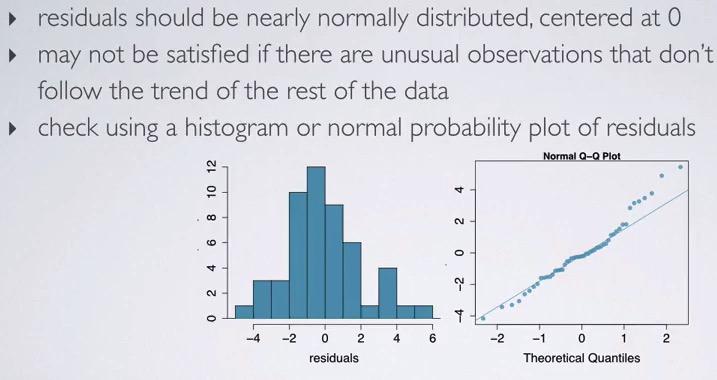 The conditions can also be looked at the residuals plot. We can convert all of the predicted and observed to residuals, plot the histogram and see whether it's normally distributed, centered around zero. By looking at plot above, there's few unusual observations, you can also look at the residuals plot, it slightly away from the trend. But this only few observations, so the condition is still met. 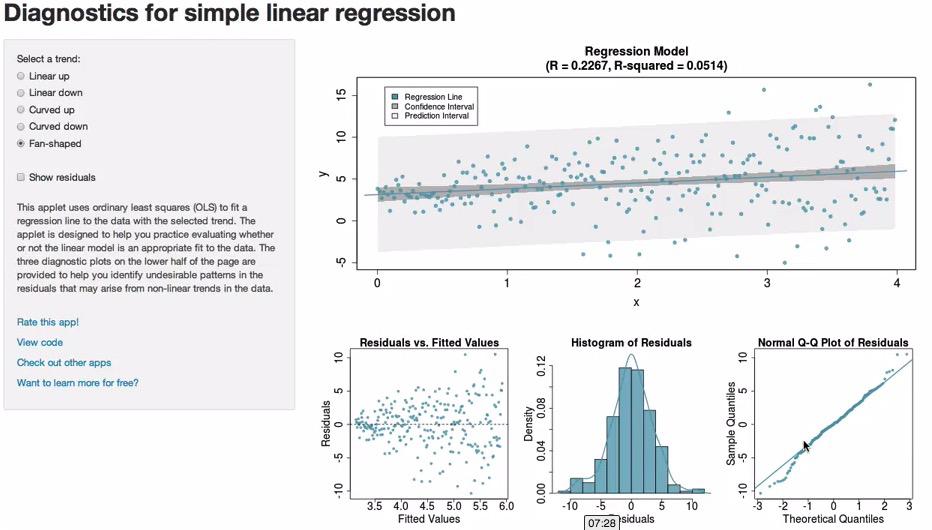 Take a look at this link http://bitly.com/slr_diag. Dr Mine Cetinkaya has been kind enough to provide us with this link to play around with kinds of scatter plot and the resulting residuals. You can see that based on the plot in the upper right corner, we can see whether it's constant variability(Plot 1), nearly normal residuals, centered around zero(Plot 2), and linearity(Plot 3).

After we checked the conditions of linear regression, we want to meassure how fit our prediction to the observed value. This is where R squared comes into play. This will tell how fit our linear model is. This can be calculated by square the correlation coeffecient. Mathematically speaking because correlation coeffecient is between 0 to 1 and can be negative/positive, R squared is always positive and ranging from 0 to 1.

Take a look at the example. We can have R squared by achieving +/- 0.75 in correlation coeffecient.How can we interpret the results in linear regression?

Example D. This is the one that's correct. We know the R-Squared value is the variability of the response variable that's explained by the model.

In determining the value of correlation coeffecient, you can rely the on the computation software to compute the square root of the given R squared, but then you have to look at the plot to see whether it has positive/negative relationship.

So for the the intercept alone, we can predict that the model predicts 11.17% average poverty percentage in eastern states. That is if we plug zero, which the category of west. If we plug one, then the slope will be live, and the model predicts 0.38% higher average than easterns states.

Let's take a look at this example. We ahve 4 levels of categorical variables. We can then make a formula with one intercept and multiple slope, and then just try to make binary 1 level that we focus on otherwise zero.So then what's the reference level? The level that we're trying to set as base comparison? You've seen in the image that midwest,west and south has been set for the slope. So all that's left is northeast, as our intercept.So when we're focusing on the northeast, we set all zero for the slope.

So if we want to focus on west, we can eliminate all the pther slopes so we only have west weight parameters, and the resulting will be 11.29. To interpret this we say, the model predicted 11.29% poverty on average of western state.

Outliers are points that distance away from cluster of points. There are many types of ourliers. Leverage points is points that fall horizontall away from the cluster, so it doesn't affect the slope of the regression, while influential points are high level leverage pints, are points that doesn't fall horizontally, and affect the slope of the line.Usually a better way to test this is plot the points with and without the outliers, and see if the slope line have considerable change.If the slope doesn't change, then the points are leverage, but if it does change, then the points are influential. After detecting the outliers, one must be careful whether to include or exclude the outliers.

This is an example of points between light intensity and temperature, by log scale. We can see that with/without outliers, the slope of the line vary greatly. It's depend on what type of finding that you want to focus. If outliers are more interesting thing, then you should include the outliers. But one can not simply join all the trend and outliers. Divide them into two groups, trend and outliers, and make regression line for each of the group. Don't join the model altogether, because it will hurt the model.

So leverage points that lies away in horizontal directions, it doesn't change the slope direction. Influential points is the points that change the direction. Determining whether the outlier is leverage/influential, is try to imagine the slope when the outlier is there vs not there.There are have to be a good reason to remove outliers, and if there's level in categorical explanatory that contains few observations but all of it are outliers, this may act as influential points.

In this section we want to talk about Hypothesis Testing significance, confidence interval, and additional conditions for inference linear regression.

Here the study is about different in intelligence when twins raised by one foster and one biological. We can see the from the plot we have positive strong relationship, with correlation coeffecient 0.882

For Hypothesis Testing, we want to test that the data provide convincing evidence that biological twin IQ is significant predictor for IQ foster twin.That is hypothesis testing to test whether or not explanatory variable affected the response variable. The skeptical would say no, and the slope is zero, alternative stated otherwise. Recall that B1 is the slope, whereas B0 is null hypothesis. 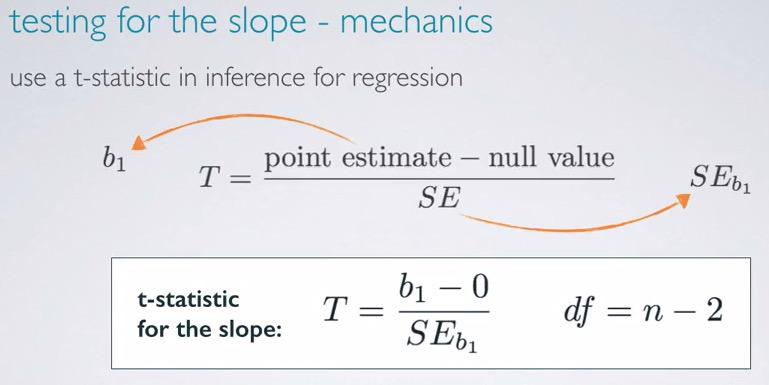 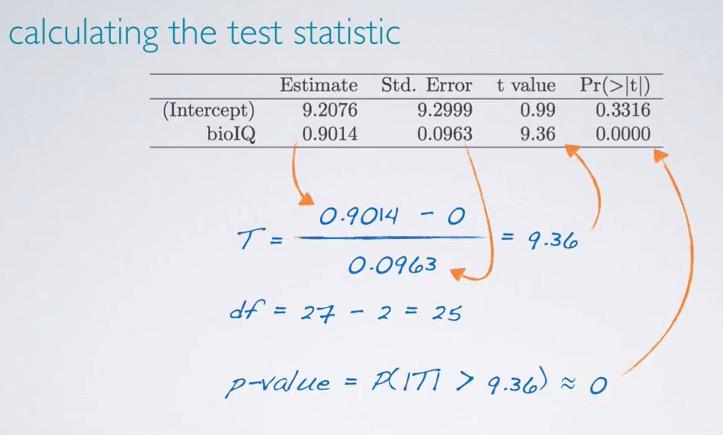 Calculating standard error is tedious and very error prone. So here we have already computed table score. Given this we can calculate t-score and get 9.36. As we know this is very huge, and rounding to 4 digits we still get approximate zero. Remember! Even if the computation results to zero, it doesn't mean it equals zero, because p-value can never be zero, it simply just too small even for rounding 4 digits. We can also calculate the intercep and we have almost 1 standard deviation. Remember that hypothesis testing is about two-sided value, so 16% x 2 equals 0.33 like in the computation. So indeed the data provide convincing evidence that biological twin IQ is a significant predictor for foster twin IQ.

For confidence interval, we can subtitute the slope and using t-critical for z-score. 95% will results in a little above 1.96, to count t-star for wider interval. Using qt in R we can get our t-critical, which should always be positive. Then the point estimate +/- t_score times standard error, we get the confidence interval. How do we interpret CI? We can say, "We are 95% confident that for each additional point on biological twin IQ, foster twin IQ are expected to be higher by 0.7 to 1.1 points.

Null value is often zero. Since here we have to catch any relationship between explanatory and response variable. That's also why the null value is zero. On computation, regression output b1,SEb1, two-tailed p-value given null value zero, for the slope. We rarely talk about intercept, because what we often want to infer is the relationship between both variables, which is done by observing the slope.

So conditions must be checked to make inference for linear regression as well. We want's to have random sample (if not often unreliable), less than 10% population, and else to make sure that observations are independent of one another. And if you're already have population data, it's useless to make inference, we only work of what based on the sample data.

Recall that R squared is about variability of y explained by x. But could it be makes to other way around? Why not unexplained variability dictates y? This requires us to use ANOVA.

For the degree of freedom, we just observing the slope (one parameter) and have 27 samples, so we have 26 total. And because 1 predictor, we get regression df 1. Residuals is just the complement.

Means of squares can be get by SS/df for each regression and residuals. Recall that F-statistic is ratio of explained to unexplained variability. Which means that as we get higher F score, we get a good estimate.

For hypothesis testing, the p-value is approximate zero. Hence we reject the null hypothesis and conclude the data provide convincing evidence that the slope is significantly different than zero(we said significantly, if it pass the significance level), i.e explanatory variable is a significant predictor of the response variable.

Using both models we achieved roughly 78%. So 78% of twin foster IQ (response variable) can be explained by the model, in other words, twin biological IQ (explanatory variable).We want to keep R squared to be approach 1, because that is the ideal model, which can predict all the y output.

In summary, we can use t-test and the resulting p-value to determine whether the indicator variable, the predictor, is sifnificant predictor or not. Regression output computed by the software always yields two-sided p-value given null hypothesis zero. We lose two degree freedom to account for intercept and slope parameters.