Feature Selection is one of thing that we should pay attention when building machine learning algorithm. For all features available, there might be some unnecessary features that will overfitting your predictive model if you include it. So choose best features that's going to have good perfomance, and prioritize that. On the other hand, we may don't see that some features, that we really need is missing (in the case of using EDA). What we want to do is synthesize a new feature based on features available.

Let's hear Katie and the team when facing bug in Enron dataset.

When Katie was working on the Enron POI identifier, she engineered a feature that identified when a given person was on the same email as a POI. So for example, if Ken Lay and Katie Malone are both recipients of the same email message, then Katie Malone should have her "shared receipt" feature incremented. If she shares lots of emails with POIs, maybe she's a POI herself.

Here's the problem: there was a subtle bug, that Ken Lay's "shared receipt" counter would also be incremented when this happens. And of course, then Ken Lay always shares receipt with a POI, because he is a POI. So the "shared receipt" feature became extremely powerful in finding POIs, because it effectively was encoding the label for each person as a feature.

We found this first by being suspicious of a classifier that was always returning 100% accuracy. Then we removed features one at a time, and found that this feature was driving all the performance. Then, digging back through the feature code, we found the bug outlined above. We changed the code so that a person's "shared receipt" feature was only incremented if there was a different POI who received the email, reran the code, and tried again. The accuracy dropped to a more reasonable level.

We take a couple of lessons from this:

Getting Rid of Features¶ 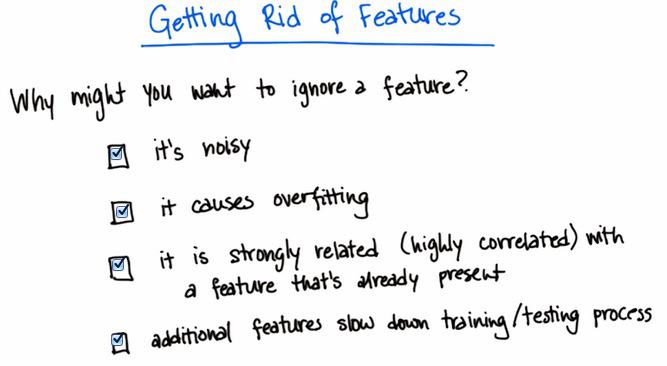 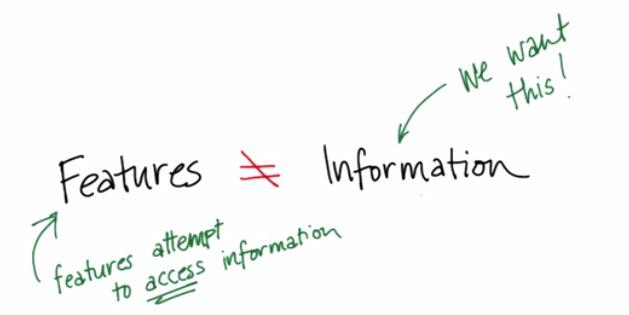 Features is not the same thing as Information. Is not technically that if you have a lot of features, then you would have gained much information. What do we want is Information. And if minimum amount of features would give you enough information, then you should do that. It's like quantity vs quality. compare to have many quantity(features), you only want to pick those with quality(information)

And here I'm repeating what Instructor at Udacity stated:

There are several go-to methods of automatically selecting your features in sklearn. Many of them fall under the umbrella of univariate feature selection, which treats each feature independently and asks how much power it gives you in classifying or regressing.

A clear candidate for feature reduction is text learning, since the data has such high dimension. We actually did feature selection in the Sara/Chris email classification problem during the first few mini-projects; you can see it in the code in tools/email_preprocess.py .

Let's take a look at the selectpercentile at sklearn

percentile = what percentage of features you want to select. Here sklearn only take top 10% features that contain the most information

In text learning you can also filter the most frequent word. Take a look at this sklearn tfidfVectorizer, that I use earlier in my blog post.

the vectorizer will then take off words that in 50% of the document, besides stop_words. The idea behind this is that if the words are so common, it may not be the feature that distinct each of the document. In other word, not have much information. You can also combine this with do SelectPercentile after you have done the vectorizer. 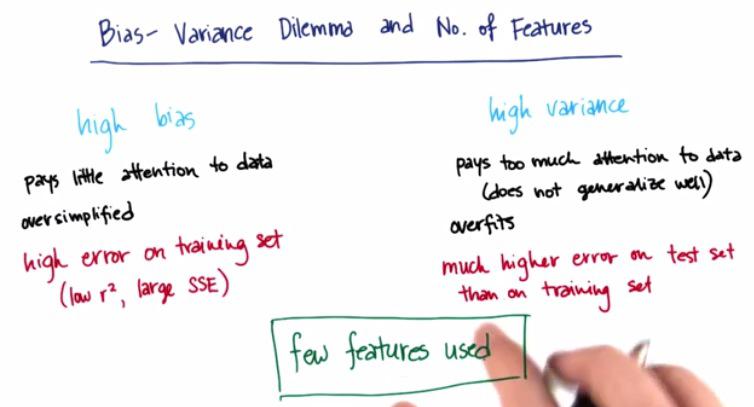 You know that high bias is when your perfomance low on training set(you can test it by residual error or sum of squared error). In terms of number of features you may select too few features in your model.

As also for high variance, you're too committed to the data, resulting to act poorly on the test set. This also means that you have too much features in your model. Be careful as you don't also try all the features to try to minimize SSE in your training dataset. 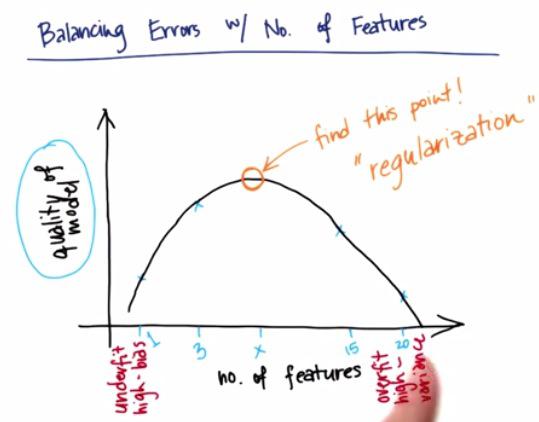 Suppose that you tried number of features and check the quality of your model. Then as you test it, you're getting more fit of your data, thus overfitting and the quality reduced. What we want to do is at the peak of the curve as graph above.

The important thing to take away is, if you have score your performance in training set poorly, then you have high bias in your learning model. On the other hand if you have great performance on your training set, but fail when you use it in a test set, then there's a strong indication that you have high variance. You can test how much features you need by keeping this in mind, and achieve large r^2 with low SSE. 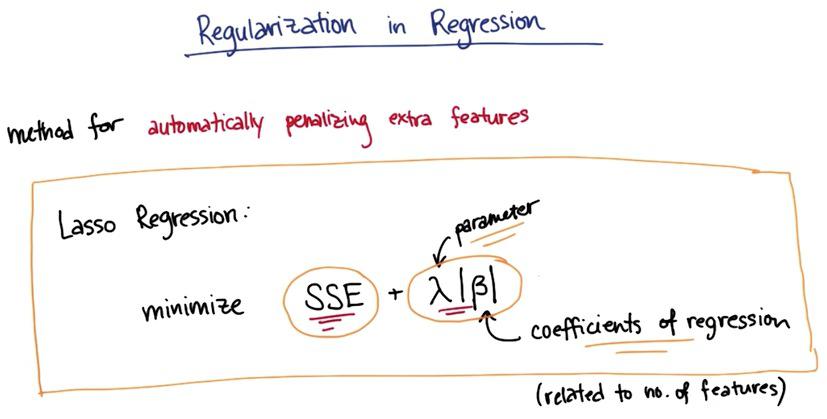 There's also method called regurization, which takes penalty as we gain more features. The higher the lambda, the more strength it will penalize the features. This is other smart moves other than feature selection.

Suppose we want to minimize SSE of our model. In doing so, we gather as much features available to us to minimize the SSE. Adding regularization will penalize our model as we get more features, therefore automatically handle tradeoff between low SSE and many features, vs high SSE and low features. Therefore the features that's not important will take higher penalty, and the features with most information will have lower penalty.

This is code snippet from sklearn documentation about lasso

For more information on mathematical process behind regularization on linear regression, logistic regression, and how it tackles overfitting, please head over my other blog posts.

Katie explained in a video a problem that arose in preparing Chris and Sara’s email for the author identification project; it had to do with a feature that was a little too powerful (effectively acting like a signature, which gives an arguably unfair advantage to an algorithm). You’ll work through that discovery process here.

The accuracy would be very high on the training set, but would plummet once it was actually tested.

A classic way to overfit an algorithm is by using lots of features and not a lot of training data. You can find the starter code in feature_selection/find_signature.py. Get a decision tree up and training on the training data, and print out the accuracy. How many training points are there, according to the starter code?

What’s the accuracy of the decision tree you just made? (Remember, we're setting it up to be overfit--this number should be relatively low.)

Yes, it has an accuracy much higher than it should be.

Take your (overfit) decision tree and use the featureimportances attribute to get a list of the relative importance of all the features being used. We suggest iterating through this list (it’s long, since this is text data) and only printing out the feature importance if it’s above some threshold (say, 0.2--remember, if all words were equally important, each one would give an importance of far less than 0.01). What’s the importance of the most important feature? What is the number of this feature?

In order to figure out what words are causing the problem, you need to go back to the TfIdf and use the feature numbers (you got those in Part 2) to get the associated words. You can return a list of all the words in the TfIdf by calling get_feature_names() on it; pull out the word that’s causing most of the discrimination of the decision tree. What is it? Does it make sense as a word that’s uniquely tied to either Chris Germany or Sara Shackleton, a signature of sorts?

This word seems like an outlier in a certain sense, so let’s remove it and refit. Go back to text_learning/vectorize_text.py, and remove this word from the emails using the same method you used to remove “sara”, “chris”, etc. Rerun vectorize_text.py, and once that finishes, rerun find_signature.py. Any other outliers pop up? What word is it? Seem like a signature-type word? (Define an outlier as a feature with importance >0.2, as before).

Update vectorize_test.py one more time, and rerun. Then run find_signature.py again. Any other important features (importance>0.2) arise? How many? Do any of them look like “signature words”, or are they more “email content” words, that look like they legitimately come from the text of the messages?

Yes, there is one more word ("houectect"). Your guess about what this word means is as good as ours, but it doesn't look like an obvious signature word so let's keep moving.

What’s the accuracy of the decision tree now? Remember, the whole point was to see if we could get it to overfit--a sensible result is one where the accuracy isn't that great!