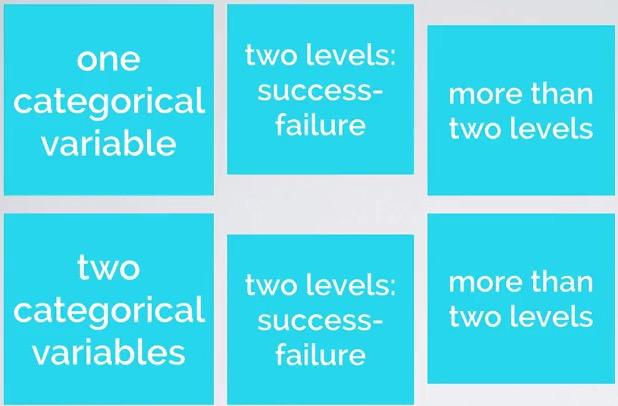 Recall that sampling distribution is when you take infinite times/all possible combination of sample, for particular sample size, and draw the summary statistic from each of the sample distribution and make a distribution out of it.

CLT is the same for proportion when use it on mean. From CLT, we want to know shape, center, and spread. The CLT requires us to use random sampling/assignment, and the mean is just equal the proportion. Spread can be calculated by incorporates the proportions and the complements divided by sample size. Then for sample size, this is similar to what we require in binomial, where you have incorporates sample size, success proportion, and failure proportions.So if p population is unknown, use point estimate proportion.

Take a look at this example. We're going to calculate the probability of at least 95% of 200 randomly selected sampled that are flowering plants. That what we usually calculate it before using pnorm function in R. Check the condtitions whether it satisfied the CLT or not. After that, we also want to meet binomial conditions for our sample size. If both conditions satisfied, we can shade the distribution and calculate it by using R what we get is.Remember that we're using least not exact in the distribution,because there's no such thing as cut exact in probability.

We also can do this in binomial. We know that using binomial, the expected value (mean) is just sample size times probability of success.

So using just binomial distribution, we're summing up 190 to 200, because we're interested of probability of getting at least 190,

It's not exactly the same as we previously calculated, but nevertheless look similar. 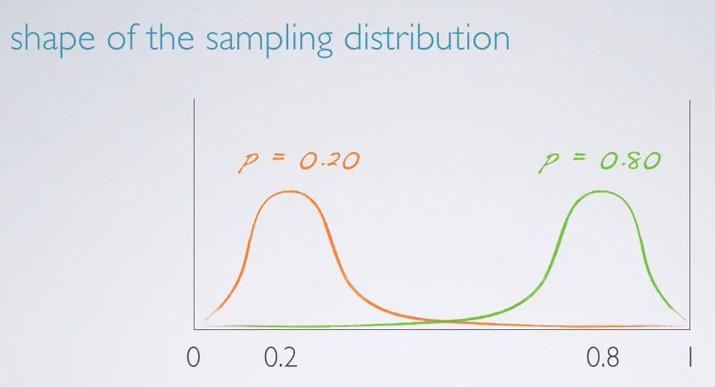 The spread can be calculated using standard error formula. We have proportion, proportion complements and sample size.

But the shape is what differs. When the proportion is closer to zero, like 0.20 in the example, we have natural boundary of the distribution can't be less than 1, this will make a long tail towards 1. Same goes for propotion that in 0.8. So depending on the propotion, we can have skewed distribution.

Intuitively, using previous examples when we have 50 random sample, 90% of p will gives us left skewed distribution.

Don't try to focus on this question, it's just act as a basis of next research question. So we're know that controlling is a better study design, we divided into treatment and control groups, so b is a better choice. This question asked to 670 people and we focus on the proportion.

So we want to estimate the proportion of population, as parameter of interest. The point estimate is what we can calculate using our sample.

So how do you calculate the confidence interval? Use 95% confidence level.

So based on this data, we can interpret confidence interval as:

So we previously learned about required sampled size for point estimate mean. For categorical variable, we use manipulate the parameter in standard of error. Since this is same example, we're going to use same proportion. Specifying the desired ME, and leave n for final calculations, we get the results. Since this is the threshold of minimal requirements, .04 will be round up 1, since there are .04 person(numerical discrete)

If we have $\hat{p}$, we can use the value to put into our calculations. If we don't have it, we use 0.5. This is picked for two reasons

HT framework is also applies really similar to what we do in the mean.

We set our point estimate as proportion sampled.

Draw the sampling distribution and shade p-value are (ALWAYS). calculate the Z critical, again we use the proportion for our SE(always when available).

Here in the example we want to use hypothesis test to know whether the majority of the Americans believe in evolution. Majority will be whichever proportion that are greater than 50%. We want to test it using our given data.

Since the question is about the alternative hypothesis, we can infer the null hypothesis, and we have proportion estimate of 0.6. Then we check the conditions.

After we validate the condition, we now proceed to the next step. 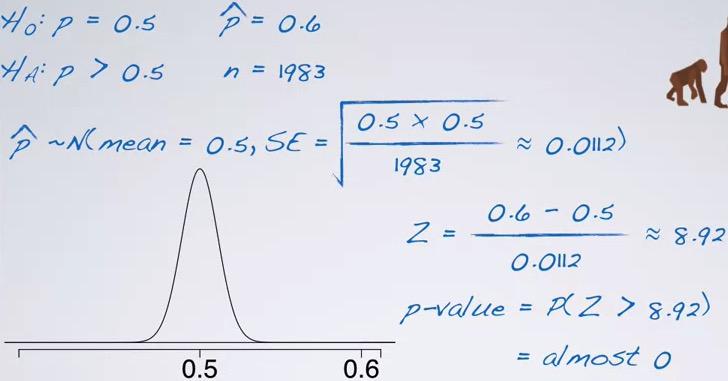 For confidence interval, we use sampled proportion (if we already know the true population proportion, it's useless to build an interval to capture it). For hypothesis testing, we have true population,and incorporate it to our standard error calculation.For numerical variable, standard error doesn't incorporate mean, it uses standard deviation. So it doesn't have discrepancy for computing confidence interval and hypothesis testing.

When calculating required sample size for particular margin of error, if sampled proportion is unknown, we use 0.5. This have advantage in two ways. First, if categorical variable only have two levels, we have fair judgement, best prior uniform. Second, 0.5 will gives us the largest sample size.

In this section we want to calculate the proportions of each of group in categorical variable.

Here we have sample from population, one from Gallup Survey, and the other one from Coursera. The proportion of success is the proportion of citizen that yes, believe there should be law to ban all handgun possesion beside police officer. Here we have different proportion between US and Coursera. It could be that those strong issue that happen in the US, is not so much in the Coursera which consist international students.

Posted a question, we're making a definition between parameter of interest and point estimate.

Again we're calculating confidence interval, so we're going the calculate the point estimate difference and standard error difference. Standard error will bigger since we're including variability of both p1 and p2. Mind that we use p hat because population parameter is unknown, later in HT we're going to replace that based on population parameter.

Again the confidence interval of two group must be check.

So, again we continue the example. Check the conditions.

So let's put it into the equation.

Since the difference proportion is Coursera-US, we can say that we are 95% confident that proportion of Courserians is 36% to 56% higher than US that believe there should be law for banning gun possesion . Eventhough we change the order, we get same results, and US will be lower than Courserians, which is equals to the statement earlier.

Should we expect significant difference when we do hypothesis testing? Of course! we know that Courserians has 36% to 56% higher than US, then that would means the difference will be significance(compared to null hypothesis, null value is 0% difference). We also know that 0% is not in the (36,56) interval 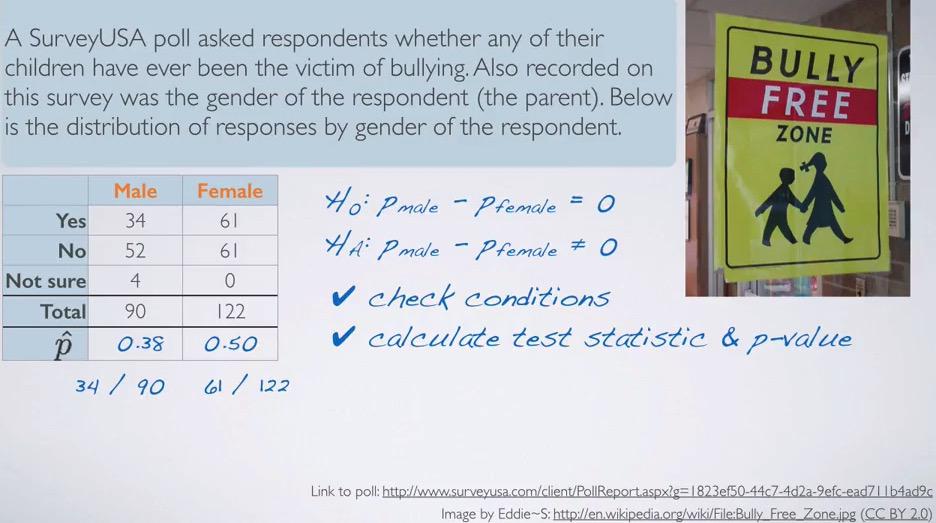 Remember that for CI we use the observed proportion, but it's little difficult for HT. we don't know the exact value of proportion 1 and proportion 2 equal to. So what do we do? We make one up. The idea is because the proportion is equal, they should be equal proportion if they joined into one population (which is both female and male are two levels of one categorical variable). So what we get is

calculating p pool we get,

So wherever p hat exist in the calculation for hypothesis testing, we replace that with pool proporton

Calculating p-pool, we know that p-pool is closer to the female than male.

After we recalculate the p pool, we we check the conditions for hypothesis testing.

Next, we proceed to calculate hypothesis testing.

So you maybe notice something different. Yes, p-pool is not value that you use for null value! It only represent what value that represent equal proportion for both female and male. But since the p pool is equal for both male and female, the difference is still zero, hence the null value is zero. So calculating everything,

Based on the p-value and 5% significance level, we would failed to reject null hypothesis, and states there is no difference between males and females with respect to likelihood reporting their kids to being bullied