There is an experience that I have with data visualization. I once audit data from OpenStreetMap, the open source powered for map navigation. I downloaded whole map of jakarta in JOSM file, and began to audit the data (in XML format). After that I uploaded the cleaned data to the OpenStreetMap website. Turns out the data that I've cleaned change the way it should work. Someone, from OpenStreetMap Indonesia told me that I'm not audit the file correctly, and show me the visualization of the map that I have audit. I make mistakes. So Visualization is important to get insight of the data. But it also important to visualize again after you do something with it.

Cole Nussbaumer, Founder of storrytellingwithdata.com, said that Data Visualization is about how we turned number into picture and stories. Makes people that read our visualization have an 'AHA' moment.

To put it simpler, Data Visualization has been split into two main category, Exploratory and Explanatory. In Exploratory, we want to know what is the data, how we defined it. Use the visualization to find the gem from all the rock. Have some unbiased presentation so reader would understand. After you get the analysis, you share your insights in the Explanatory.

Explanatory itself has been divided into five steps.

You may also want to take Alberto Cairo's Three Steps to Become a Visualization Designer.

It really is how we ask interesting quesions about the data. Even if the data simple, only containing two data points, it still can substract effective information.

Common mistake is that we put too much thinking of our model/analysis, but doesn't give too much for visualization. It's like when you code tons of lines of code, but because the lack of documentations, nobody would use it. It's the same for analysis/model. If your visualization isn't that good, people won't understand your work and it's pretty much useless. Data Visualization also a beatiful merge of arts and science. You may have code intensively, but you also want it how turn those codes, result, number to visual. How creative you are, how you choose plot kinds and colors. 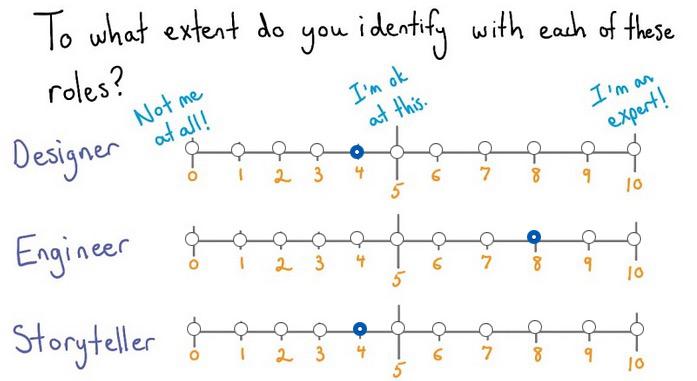 So until know, we can safely assume that Data Visualization is how we make Data (programming), Visualization(designer) to join into a narrative story. If you're want to be focused on the visualization part, big data will always need programming, eventhough maybe there's some advance tools that gonna out there that encapsulate deeper level. If you come from a designer, you may want to practice your skills in the Ilustrator first and try to connect things. Programmer should lern how is the design language and principles. So whether you comes from programmer or designer, it's a fair side for everyone. 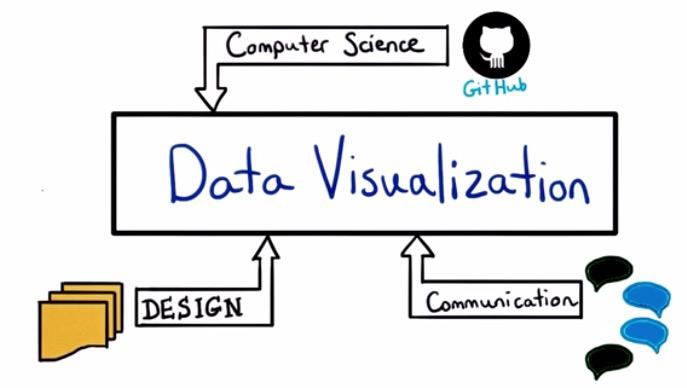 So, whether your comes from background that takes coding, design, or communication. It takes all of these three background to make a great visualization. 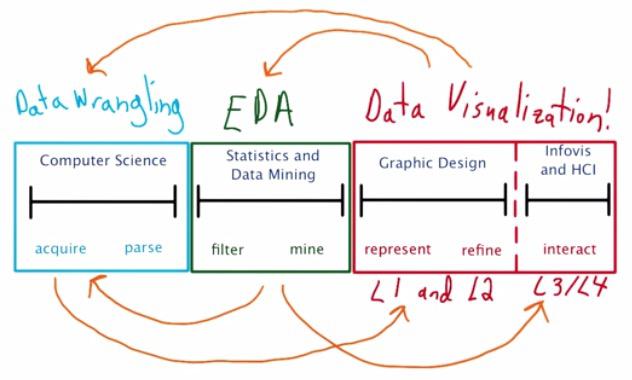 This is how Data Visualization takes a greater part in Data Science. In Data Science, you want to wrangle the data, make an analysis from it, and perform the visualization.

The first part of the process is wrangling and munging. You wrangle data, from multiple resources. Either it comes from other website through API, scrapping data, or users' log, database, load some mapreduce pipeline.

The second part is where some says the heart of data science. Where the magic happens.We perform some Exploratory Data Analysis, maybe some statistical or mathematical theory implemented, to get insight of the data.

Part three is where you make the visualization. Part one and two can't be ignored.You want to share insights of the data that you have. And without the data, there can't be visualization.This is where the designer part comes from. How to choose different plot that most effective explain your insights.

The final part is how we make the narrative story.Make some sort of priortized order. Do this in such a way achieve Human Computer Interaction. The best visualization is not only people understand insight of your graph, but also discover insights theyselves.

Each step is iterative and repeatitive.You can make the visualization to explore your data, if the visuals shows your EDA isn't that good, then go back to perform EDA. The data that you wrangle may add to narrative story. So this skills is expensive and much to learn.

Earlier, we talked about exploratory and explanatory. It's important to know the difference. In the exploratory section, it's you and your data. You want to make scatter plot, histogram, or boxplot that best repsents the insight that you want to learn. In the explanatory section, it's you and your audience. You want to repsent in the most interesting way that your reader could get through.

You shouldn't rely only on the summary statistics of your data. Take a look at the different category x and y in the table on the left. You can see that you will have some mean,correlaction coeffecient, line of best fit, standar deviation and so on. But when you plot it in the visualization, you will get different plot. There's also some outliers involved. It's important to plot your data aside from the statistics overview. This graph is drawn by Anscombe's Quartet to explain the important of visualization in our data.Not only the visualization is important to get insights of our data, but also how are the brain of ours process insights faster significantly by visuals. Take a look at this graph. 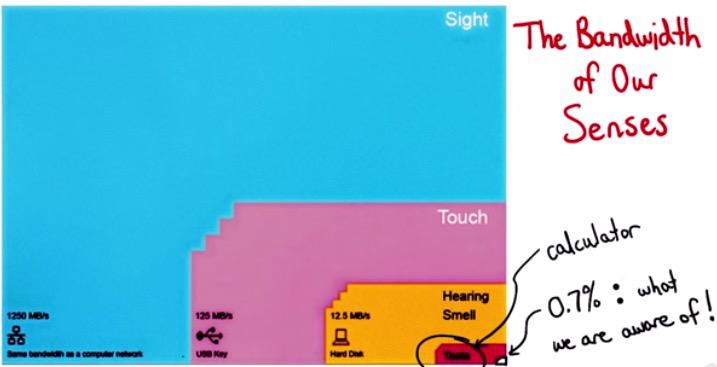 You can see that through our eyes, we proceeds faster and aware. Take a look at the Edwards Tufte's explanation and Penn researchers of how powerful visuals and eye in the human brain. 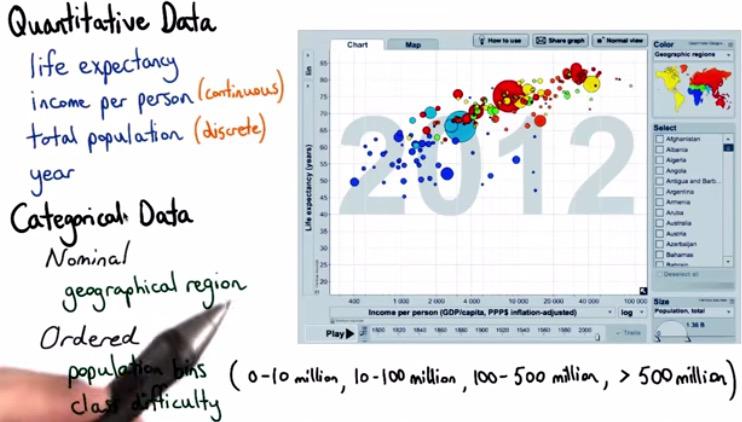 This is the visualization from the video from Hans Rosling, of how he want to make visualization that people both enjoy and understansd. I highly recommend you to watch this 4-minutes video. 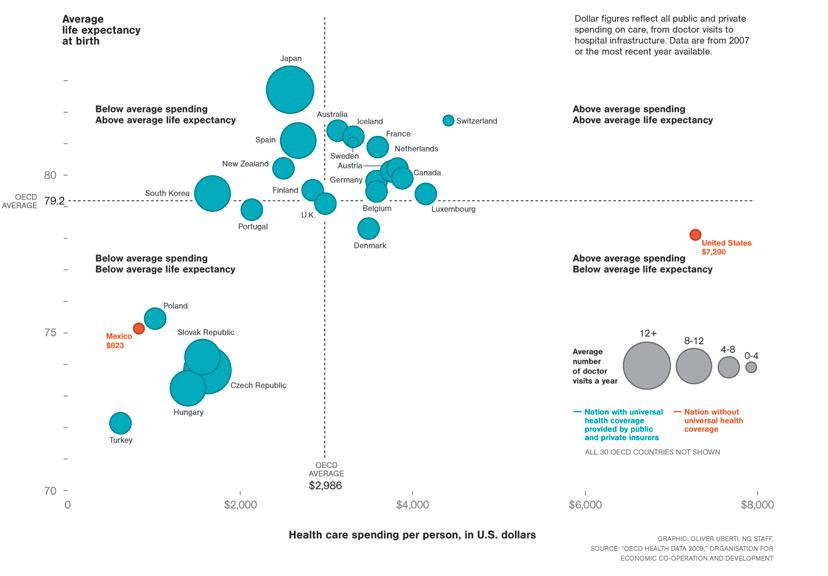 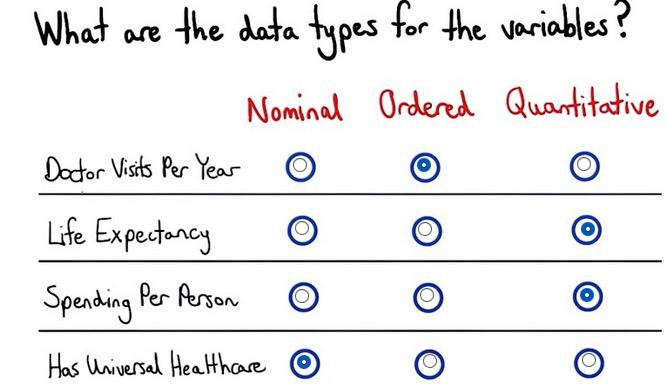 Take a look at how the graph shown and the type of data. Spending per person and life expectancy can be moved as quantitative data, data that we can take computation. While doctor visits, as explained, has been divided into categorical ordered bucket, shown by the explanation on the right. And finally, has or hasn't health care is just yes/no categorical.

Visuals Encodings, is about how we map data to visuals. Here we can see each of the variable fall nicely to the type of data. This is multi dimension of data. 3D graph is difficult to perceieved than 2d graph, because we may have ambiguous perspective. So the way we do this is set another visuals that can add 3d dimension, which you can find any of these Retinal Variables. 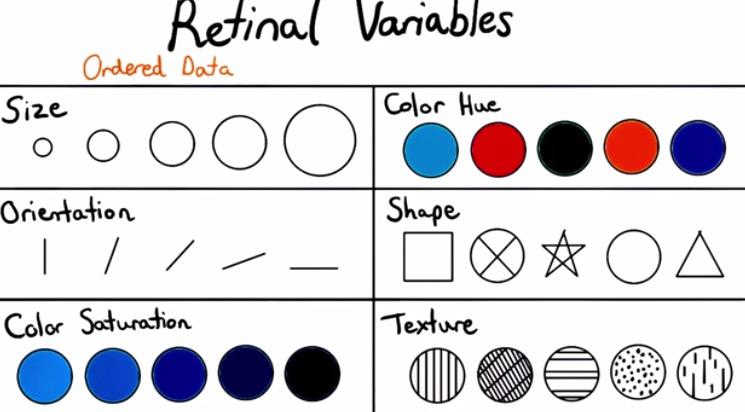 Thing to note is saturation is difficult to differentiate with human eyes. So we can avoid that. There also time series in the graph that presented as frame so it animate nicely when it's being playing on. 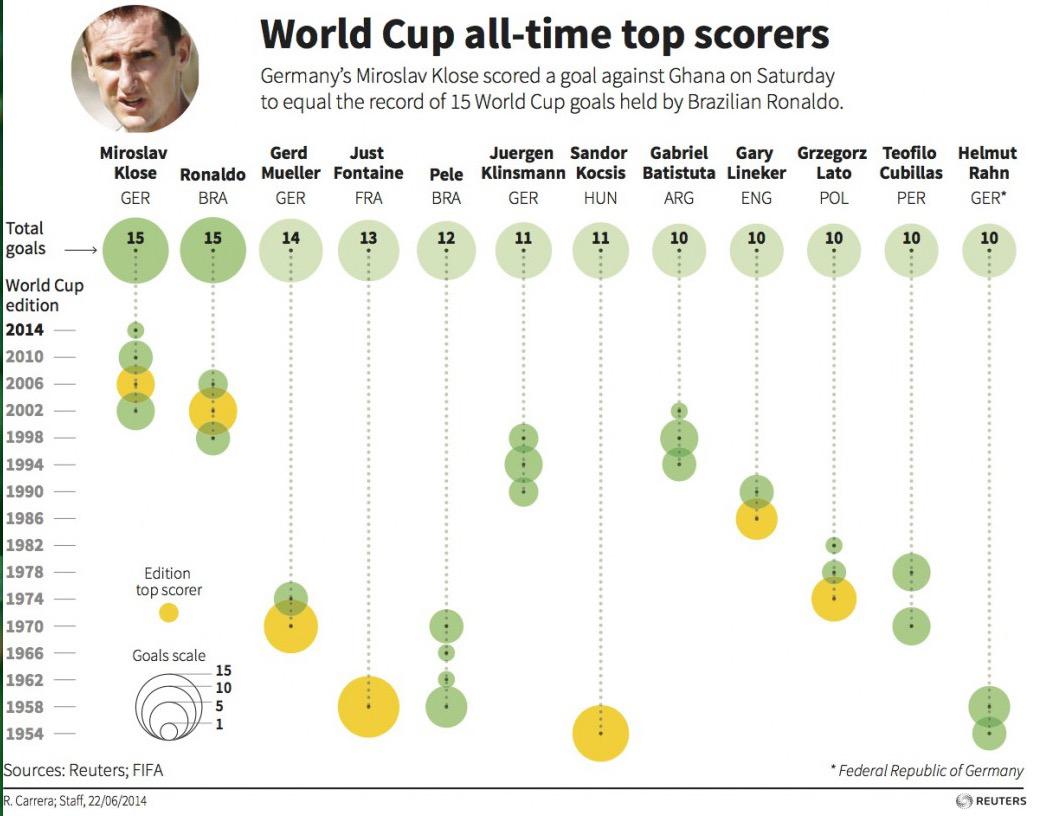 This is is from the top goal scorer history of the graph. We have player-country as position x. Time as position y. Goal scored, how much goals(in size) for every year. Whether they top scorer performed by color saturation. 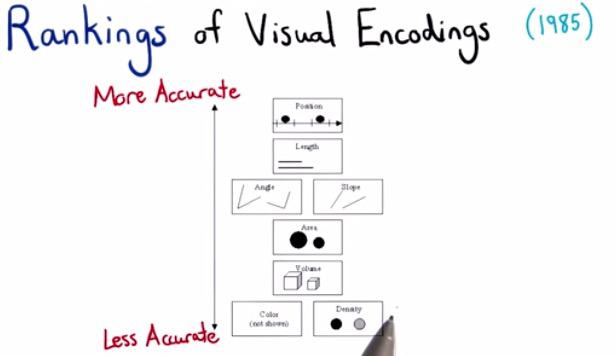 Cleveland and McGill in 1974 published a paper that shows the order in which you want to plot the most accurate to the less acurate. If you plot multiple dimension of data, prioritized them in order. Then you want to take 2 of most important variables as position and the rest as the other kind of retinal variables.

decomposing visualizations is a good practice if you're into data visualizatins. This is like a reverse-engineering for software. You want to know what are the graph consist of and how it effectively represented in such a way showing their insights.Take a look at data visualization performed by Nelson Auner, Making Indonesia 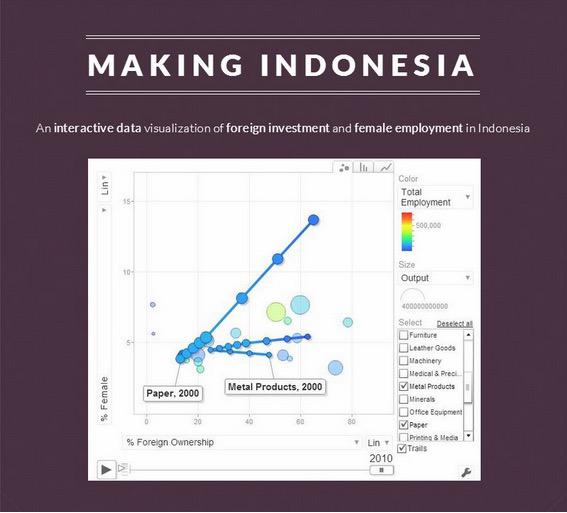 This data visualization is amazing! He's recreating the work of Hans Rosling, winning Data Visualization Challenge 2014 at UChicago. You can see that similar to Hans Rosling, time series as a frame that you can play and animate towards the end. The position is % foreign investment as x axis and female employment as y axis, both are quantitative data.. Output as color saturation from blue to red, and the number of firms as the size of the circle, as quantitative discrete data. All of these circle are categorical from every sector of the job. 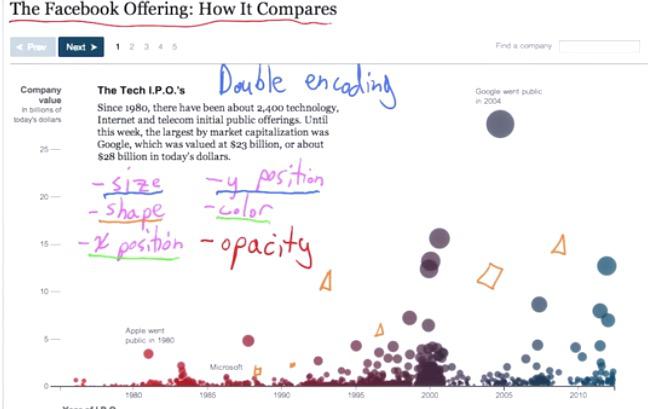 Let's take a look at Facebook Offering, you can find the link here. You can see that the first thing that it does is the title. It's important to create a title that makes the readers focus on the thing that data visualization want to say. In this example, The visualization makes double encoding, to emphasize more on the variables. the y position and size describes the company value, while x position and color describe time-series year of I.P.O. 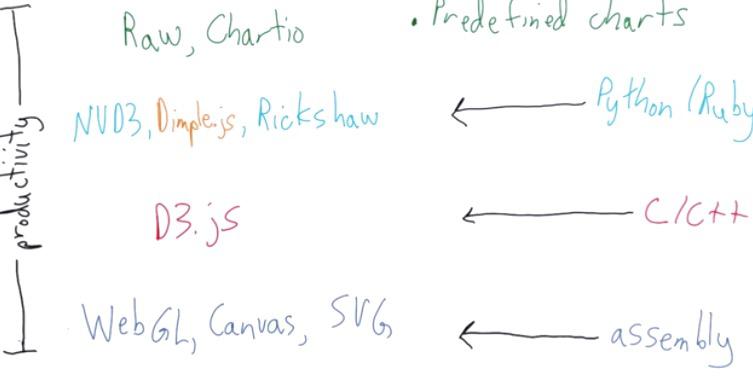 For the Data Visualization in the internet, D3.js by Javascript relies on the programming language of the assembly level. like html,css,svg.Because it's the lowest level, it's really efficient, flexible, but hard to develop with.

D3.js is like the level of C++ complexity, where you pretty much encapsulate everything that needed for data visualization.

In the higher level, there's NVD3, Dimple.JS, Rickshaw that build on top of D3.js. This like scripting level like Python or Ruby. But it get's lower flexibility like D3.js, and tailored for specific cases, like Rickshaw.

In the top level, you will have Chartio. It's a library that like tool, encapsulate from programming, and can be use for 90-95% cases. It builds dashboards and charts.

It's important to note this spectrum level of software. There's a trade off between the flexibility and effortless. You can stray away from the path that Chartio uses to have more flexibility but build time slower, or the other way around. From your data science project, you may want to think about how much data visualization impact in your project, and choose whichever library based on the tradeoff.

Data is what usually refer to, in format like json or xml. The Documents itself is the source file(html file) that we want to parse on. So D3 is drive the data towards Documents. During there's page load, fetching html file from web server, DOM is created.DOM is Document Object Model that built based on parse html file from the server. as page loading, the DOM building its structure. DOM can be parse by other programming languages, like Python or Java.D3 is built on top of Javascript API, which build to the DOM, that later drive to the Documents. DOM is spesification, a hierarichal object, from the root of tree build the model. 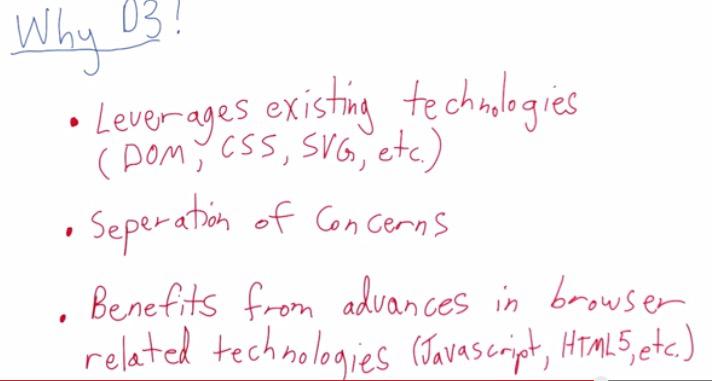 D3 has many advantage. D3 can encapsulate visualization from the mechanics. D3 code can generate its own html file and svg objects, so designer can build on top of this and ask the developers if it need to custom more visualization.D3 can manipulate its html file and nodes.

Javascript itself can provide some interactive visualization on the client side, while keeping static on the server side, so D3 can be benefit from it.For developer, they can use Javascript libraries, text-editor,speedup performance of the Documents, or other thing that already advantage of Javascript.